A short history of the West Cape May Volunteer Fire Company:

The Great Fire in 1878 in Cape May, which swept over 30 acres of hotels and cottages, to some may have proved to be a blessing in disguise. 46 new hotels and cottages erected after the fire affording accommodations for 10,000 guests. The fire made a clean sweep, leaving a clear field that could be laid out in what was thought at the time to be in accordance with modern taste and requirements. But to neighboring West Cape May, it was somewhat of a wake-up call. They must have wondered whether a fire or conflagration could hit their community. After all, West Cape May had many large frame houses that were built close together. The community thinking must have been if one frame structure catches fire, and there was a stiff wind, could we be in the same situation as Cape May was?

Although there is no documented evidence that can be found as to when West Cape May residents came together to suppress fire in their community, there is circumstantial evidence that it was around 1885. The fire bell hanging in front of the current fire house is dated 1904 and it has cast on it "West Cape May Fire Department". What I could find in print about West Cape May around the turn of the century was a statement that "fire protection is provided by a volunteer department with two hose carriages and a thousand feet of hose. A water main from Cape May runs through the town and fire hydrants are placed on all street corners." Between the time of the Great Fire in Cape May and up to around the turn of the century it is surmised that when there was a fire in West Cape May prior to 1904 the church bell at the chapel located at Broadway and Fifth Avenue would sound and all the able bodied men would respond to pull the hose carriages to the fire. These hose carriages would lay fire hose from the fire and hook up to fire hydrants along Broadway to fight fires. Maybe no Chief, just neighbors turning out to help those in need. In 1904 the West Cape May Fire Department had a fire bell to sound. There was no fire company incorporated by the state until 1921. (Over the years, old records are now non-existent until the West Cape May Volunteer Fire Company was incorporated in 1921.) In early days in the big cities, people would throw their leather buckets out their doors when the alarm of a fire sounded. The younger men would respond for the "bucket brigade". Eventually, even in little towns like West Cape May there was seen a need for an organized body of persons who could be counted on to respond when the need occurred for firefighting. 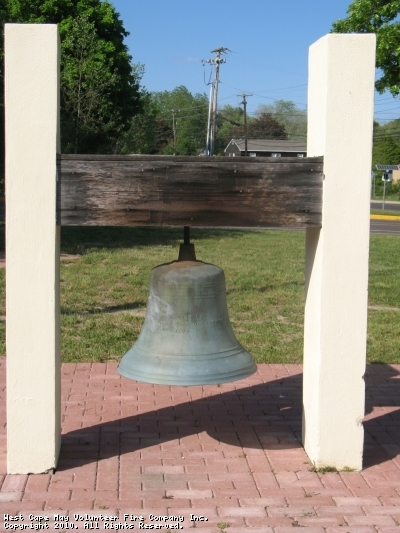 That step took place in West Cape May and occurred on August 8, 1921, where it is recorded in the minutes that "a meeting of the people of the Borough of West Cape May, New Jersey held this evening at the Borough Hall for the purpose of affecting the organization of a volunteer fire company of the Borough ". At the time temporary officers were elected. They were H.H. Eldredge, Chairman, and H.S. Fisher Secretary. "The only action taken was that the chair publishes such notices as necessary to call a meeting to affect a permanent organization". The meeting was called to order by H.H. Eldredge, chairman and the following officers were duly nominated and elected: President W.N Savage; Vice President Joseph Stewart; Secretary H.S. Fisher; and Treasurer R.W. Hughes. A committee was chosen to make up by-laws. In other business it was decided that the company should be known as the West Cape May Volunteer Fire Company and be so incorporated. It was moved that W.S.H Speace was appointed to investigate the New Jersey Firemen's Relief Association. The following members joined the Fire Company: W.N Savage, Joseph J. Stewart, H.S. Fisher, R.E. Hughes, John Meyer, Lewis Hoffman, Gustane Rott, Stillwell Eldredge, George C. Rea, Orion Roseman, Orion Reeves, W.S. Speace, Theodore W. Reeves, Coleman Camp, C.H. Newkirk, Joseph Roseman, S.H. Toy, Samuel Stillwell, R.I Springer, Charles Baker, Thomas F. Hemingway and George O. Cummings. On September 9, 1921 additional applications for membership were received of William Chambers, Evan M. Brown, Marvin Oliver, Harry Tolbert and Clarence Smith. At that meeting Marvin Oliver was duly elected chief. The following officers were elected: Assistant Chief Joseph J. Stewart, 1st Foreman Lewis Hoffman, 2nd Foreman Clarence Smith, 3rd Foreman Harry Tolbert. Also at that meeting it was moved that the Fire Company ask Borough Council to purchase two chemical extinguishers, one for each cart and 500 feet of hose. In West Cape May the hose carts were pulled by hand. On September 30, 1921 at a special meeting it was moved by Lewis Hoffman that the company ask the Borough Council to purchase a Ford Combination hose, chemical and ladder truck. (Motorized fire apparatus was coming on fast and furious at the time, and the larger cities where horses pulled the apparatus, the horses were being put out to pasture.) Lewis Hoffman went on to become the first chief of the West Cape May Volunteer Fire Company. 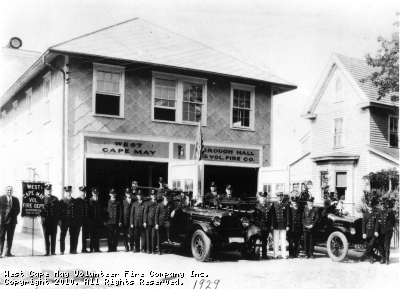 March 6, 1922 the West Cape May Council met with Mayor Morton presiding. They passed an ordinance authorizing the purchase of a fire engine. The contract was signed with Faust Company who was the low bidder for $3,000.00. 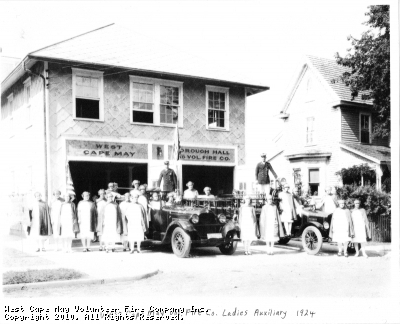 February 2, 1925 the West Cape May Council heard from the Fire Company Siren Committee. They had checked out several siren companies and gave their recommendation to Council. The committee was unanimous in the selection of the Federal Double-Head siren. Council instructed the committee to purchase the siren at a net cost of $401.37 F.O.B. Chicago. The siren was to be installed the 1st of March that year. Up until this time a bell that hung outside the fire house had to be rung by hand. That bell was purchased in 1904 and is now in front of the fire house at 732 Broadway.

Although the siren worked on October 22, 1925 at 8:30 p.m. for a fire at John Vassar’s home on 6th Avenue, it did not save his home. But it showed the fire company and the community that the fire company was under equipped and that the Borough needed apparatus and water mains. West Cape May and Cape May were forced to stand by and watch the home burn. The closest fire hydrant was on Broadway at least ½ mile away. The fire had gotten beyond the scope of the chemical apparatus which had the only tank water. The kitchen was a mass of flames when the fire company arrived at the frame house. The firemen did save the livestock and out buildings. The 71 year old Vassar lived with his wife on the old homestead. He was retired from the Pennsylvania Railroad after 30 years of service. He was “a highly respected citizen of the Borough” according to the Star and Wave newspaper.

A small group of men with support of the community have worked hard over the years to make the fire company what it is today. An additional fire engine was purchased around 1924 and a 1937 LaFrance Pumper was purchase in the fall of 1937. 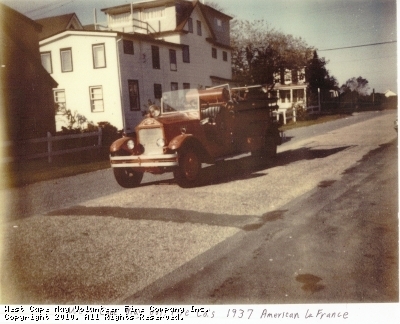 In 1958 a Dodge Pumper was purchased from Kabalan Motors when Cecil McCullough was the Fire Chief. 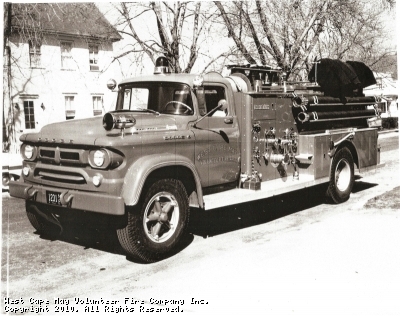 In 1969 a Pioneer Pumper was purchased while Al Noble was Chief. 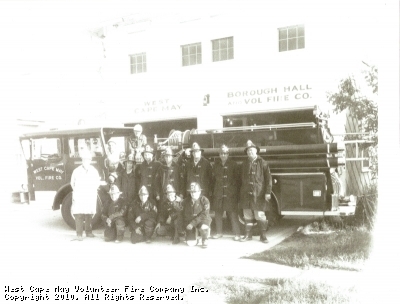 Over the years second hand apparatus was purchased and a Bruco Pumper was bought from Slackwood Fire Department in Pennsylvania to replace the Pioneer. In 1977 an Oshkosh Sanford Pumper was purchased. 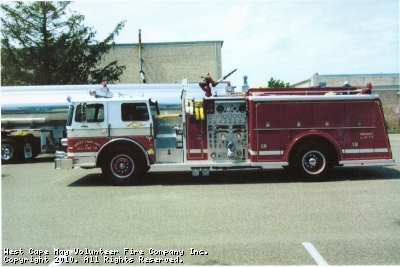 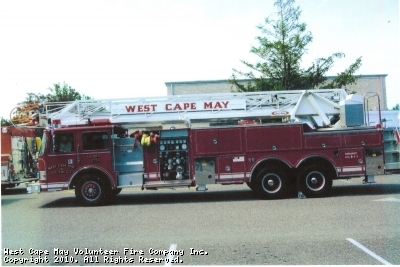 Besides this ladder truck the West Cape May Fire Volunteer Company operates with two pumpers, a walk-in Van rescue truck, and a 4 wheel drive brush truck. The first due responding pumper is a 1993 1500 gpm Freightliner pumper. 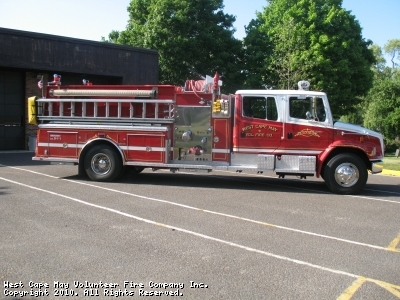 The West Cape May Volunteer Fire Company is fully volunteer and saves the tax payers of West Cape May thousands of dollars each year.

It is important to reassure the people of West Cape May that when they have a fire emergency 24/7/365, that the dedicated firefighters of the West Cape May Volunteer Fire Company will respond to their needs in a professional way. Their training and experience coupled with their modern equipment will arrive in minutes.

You can now make a Tax Deductible donation using your Credit Card on our Donation page: